About Alresford
'The ford over the river where the alder trees grow.'

There are actually two Alresfords, the beautiful Georgian Town which for many centuries was a prosperous wool town and the village of Old Alresford a mile away to the North. Old Alresford is mentioned in the Domesday Book but the present town of New Alresford did not come into existence much before 1200 at the time when the Great Weir was being built to create Old Alresford Pond as a fish pond for Bishop d'Lucy's palace at Bishop's Sutton. It also provided a head of waater for the many mills downstream and eventually for the Itchen Navigation. There is no evidence that the Itchen Navigation ever came beyond Winchester but it is probably the case that the water was allowed to fall whilst 'punts' were loaded with wool and other goods, close to Mill Hill. The water would then be released from the pond and the punts would be floated down to Winchester on a wave of water, 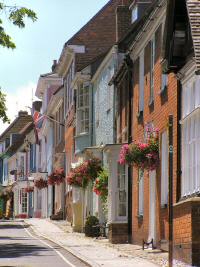 The colour-washed Georgian houses you see today rose from the ashes of great fires in the 17th Century.

Alresford is the perfect place for strolling and there is plenty to please the eye - The Fulling Mill and riverside walk, St. John's Parish Church, the Millennium Trail and Old Alresford Pond, created by Bishop de Lucy, Bishop of Winchester, in the 12th century.

Visit the specialist shops selling antiques, gifts, food, clothes for all ages, antiquarian books, pictures, china and crafts. With pubs, hotels, restaurants and tea rooms, your every need will be satisfied. And don't forget to visit the Watercress Line steam railway that runs from Alresford to Alton through 10 miles of beautiful Hampshire countryside.

Inviting Places to Stay Gardens open to the Public

Broad Street is a contender for the county's most beautiful street, tree-lined it combines a feast of Georgian colour-washed buildings with interesting shops and hostelries, all based on Bishops de Lucy's medieval town plan.

The riverside walk is a delight and, straddling the River Arle or Alre, you will find the tnatched timber-framed Fulling Mill, built in the 13th century. (Walk can be muddy in wet weather.) The riverside walk follows the route of a ford that may have been the one from which Alresford takes its name. 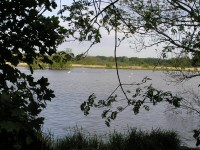 Old Alresford Pond was formed in the 12th century as part of a project to dam the Arle or Alre  stream, today it is home to wildfowl and otters.  In the Soke Gardens (down the lane to the right of the Globe on the Lake) is a plaque honouring Captain Robert Cogswell, 303 Bomb Group, US 8th Air Force whose conduct saved Alresford from a potential disaster in 1943.

There has been a church on this site since the 12th century. In 1400 a perpendicular church was built replacing the early English one. Only the tower and the outer walls of the nave survived the fire of 1689. The church was extensively rebuilt in 1898 around the old walls and tower and is  a Grade 2* listed building. The French soldiers' graves date back to the Napoleonic Wars. 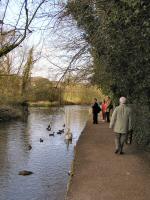 Created in Millennium Year, the Millennium Trail uses a series of existing paths round the town to provide a pleasant and informative walk of about one mile. Detail of what can be seen during the walk is contained in a separate leaflet (reproduced on the site),Alresford Millennium Trail, which is available from the Station Information Office, the Library and many of the shops in the town.

Hampshire's only preserved steam railway the Watercress Line runs for 10 miles of steeply graded track. Powerful locomotives haul the trains through beautiful Hampshire country scenery to the market town of Alton. It passes through two intermediate stations - Ropley, which is the railway's engineering base (visit the locomotive yard); and Medstead & Four Marks, the highest station in southern England. 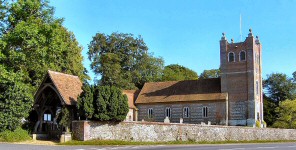 St. Mary the Virgin Church is a pleasant walk of less than a mile either across the weir past The Globe on the Lake or along the footpath past the watercress beds at the bottom of Mill Hill. Old Alresford Church is the epitomy of a Hampshire Vilage Church where you will find the tombs of the Rodney family who lived in the village adjacent to the church in the 18th and 19th Century. It is recommended that you use the footpath as there is no pedestrian path across the weir. 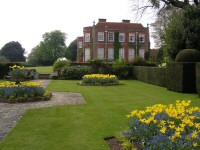 Hinton Ampner Garden was designed and laid out in 1936 and is one of the best examples of a mid-twentieth century designed garden in the country. The 12 acre formal garden, set in 80 acres of parkland, has now matured into a tranquil, colourful and scented paradise that you can visit through the seasons. The one acre walled garden, previously the private reserve of the tenant, is planned for opening to the public in 2006.

Hinton Ampner - A Hampshire Manor - some history of the house.

Itchen Stoke is only 1.5 miles from Alresford where there is a wonderful example of a Victorian, Gothic Revival Church. It was designed by Henry Conybeare, Architect, for his brother the then Rector, and is based on his design of Sainte Chapelle, Paris. The Church has elegant arched windows with clear red, blue and green glass arranged in geometric patterns, throwing wonderful kaleidoscopes of colour onto the stonework and floors. The floor of the Sanctuary is decorated with glazed tiles forming a maze or "Prayer Labyrinth".

Itchen Stoke can be reached by taking the B3047 on the Winchester side of Alresford, by bus or on foot walking around the many Valley footpaths. St. Mary's and several hundred other Churches have been saved by The Churches Conservation Trust. 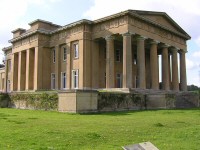 Early 19th century neo-classical mansion. Exterior viewing only, home to Grange Park Opera in high summer. There are more pictures of Northington Grange in our galleries.


Other attractions within a short drive of Alresford.